Polylactic acid, or polylactide (PLA) is a thermoplastic polyester with backbone formula (C3H4O2)n or [–C(CH3)HC(=O)O–]n, formally obtained by condensation of lactic acid C(CH3)(OH)HCOOH with loss of water (hence its name). PLA can also be prepared by ring-opening polymerization of lactide [–C(CH3)HC(=O)O–]2, the cyclic dimer of the basic repeating unit. The two mojor producers of PLA ar NatureWorks and Total Corbion. 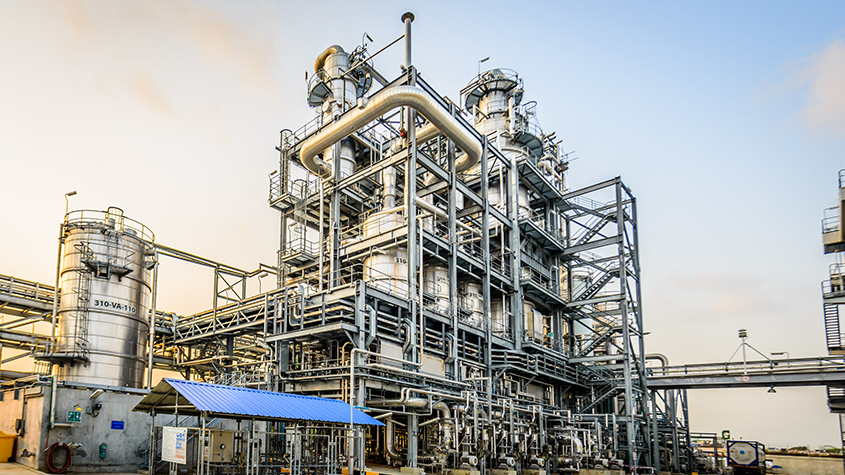 PLA has become a popular material due to it being economically produced from renewable resources. In 2020, PLA had the highest consumption volume of any bioplastic, although it is still not a commodity polymer. PLA is the most widely used plastic filament material in 3D printing.

The monomer is typically made from fermented sugars or starch such as from corn, cassava, sugarcane or sugar beet. Several industrial routes afford usable (i.e. high molecular weight) PLA. Two main monomers are used: lactic acid and the cyclic di-ester, lactide. The most common route to PLA is the ring-opening polymerization of lactide with various metal catalyst (typically tin octoate) in solution. The metal-catalyzed reaction tends to cause racemization of the lactic acid, reducing its stereoregularity. 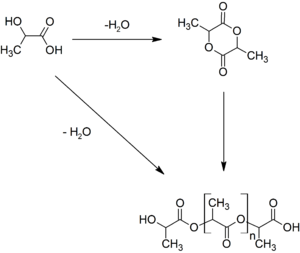 The direct condensation of lactic acid monomers can also be used to produce PLA. This process needs to be carried out at less than 200 °C; above that temperature, the entropically favored lactide monomer is generated. This reaction generates one equivalent of water for every condensation step. The condensation reaction is reversible and subject to equilibrium, so removal of water is required to generate high molecular weight species. Water removal by application of a vacuum or by azeotripic distillation is required to drive the reaction toward polycondensation. Molecular weights of 130 kDa can be obtained this way. Even higher molecular weights can be attained by carefully crystallizing the crude polymer from the melt. Carboxylic acid and alcohol end groups are thus concentrated in the amorphous region of the solid polymer, and so they can react. Molecular weights of 128–152 kDa are obtainable thus.

Polymerization of a racemic mixture of L- and D-lactides usually leads to the synthesis of poly-DL-lactide (PDLLA), which is amorphous. Use of stereospecific catalysts can lead to heterotactic PLA which has been found to show crystallinity. The degree of crystallinity, and hence many important properties, is largely controlled by the ratio of D to L enantiomers used, and to a lesser extent on the type of catalyst used.

Due to the chiral nature of lactic acid, several distinct forms of polylactide exist: poly-L-lactide (PLLA) is the product resulting from polymerization of L,L-lactide (also known as L-lactide).

Physical and mechanical proerties of PLA

PLA polymers range from amorphous glassy polymer to semi-crystalline and highly crystalline polymer with a glass transition temperature of 60–65 °C, a melting point of 130-180 °C, and a tensile modulus between 2.7 and16 GPa. Heat-resistant PLA can withstand temperatures up to 110 °C. The basic mechanical properties of PLA are between those of polystyrene and PET. The melting temperature of PLLA can be increased by 40–50 °C and its heat deflection temperature can be increased from approximately 60 °C to up to 190 °C by physically blending the polymer with PDLA (poly-D-lactide). PDLA and PLLA form a highly regular stereocomplex with increased crystallinity. The temperature stability is maximised when a 1:1 blend is used, but even at lower concentrations of 3–10% of PDLA, there is still a substantial improvement. In the latter case, PDLA acts as a nucleating agent, thereby increasing the crystallization rate. Biodegration of PDLA is slower than for PLA due to the higher crystallinity of PDLA. The flexural modulus of PLA is higher than polystyrene and PLA has good heat sealability.

Enhancing the properties of PLA

Several technologies such as annealing, adding nucleating agents, forming composites with fibers or nano-particles, chain-extending and introducing crosslink structures have been used to enhance the mechanical properties of PLA polymers. Polylactic acid can be processed like most thermoplastics into fiber (for example, using conventional melt spinning processes) and film. PLA has similar mechanical properties to PET polymer, but has a significantly lower maximum continuous use temperature. With high surface energy, PLA has easy printability which makes it widely used in 3-D printing. The tensile strength for 3-D printed PLA was previously determined.

PLA is soluble in solvents such as hot benzene, tetrohydrofuran, and dioxane. Because of its ease of access and low risk of use, Ethyllactate is of most interest. PLA 3D printer filament dissolves when soaked in ethylacetate, making it a useful solvent for cleaning 3D printing extruder heads or removing PLA supports. The boiling point of ethylacetate is low enough to also smooth PLA in a vapor chamber, similar to using acetone vapor to smooth ABS. Other safe solvents to use include propylene carbonate, which is safer than ethylacetate but is difficult to purchase commercially. Pyridine can also be used however this is less safe than ethylacetate and propylene carbonate. It also has a distinct bad fish odor.

Because PLA can degrade into innocuous lactic acid, it is used as medical implants in the form of anchors, screws, plates, pins, rods, and as a mesh. Depending on the exact type used, it breaks down inside the body within 6 months to 2 years. This gradual degradation is desirable for a support structure, because it gradually transfers the load to the body (e.g. the bone) as that area heals. The strength characteristics of PLA and PLLA implants are well documented.

PLA can also be used as a decomposable packaging material, either cast, injection-molded, or spun. Cups and bags have been made from this material. In the form of a film, it shrinks upon heating, allowing it to be used inshrink tunnels. It is useful for producing loose-fill packaging, compost bags, food packaging, and disposable tableware. In the form of fibers and nonwoven fabrics, PLA also has many potential uses, for example as upholstery, disposable garments, awnings, feminine hygiene products, and diapers. Thanks to its bio-compatibility and biodegradability, PLA has also found ample interest as a polymeric scaffold for drug delivery purposes.

Racemic and regular PLLA has a low glass transition temperature, which is undesirable. A stereocomplex of PDLA and PLLA has a higher glass transition temperatures, lending it more mechanical strength. It has a wide range of applications, such as woven shirts (ironability), microwavable trays, hot-fill applications and even engineering plastics (in this case, the stereocomplex is blended with a rubber-like polymer such as ABS). Such blends also have good form stability and visual transparency, making them useful for low-end packaging applications. Progress in biotechnology has resulted in the development of commercial production of the D enantiomer form, something that was not possible until recently.